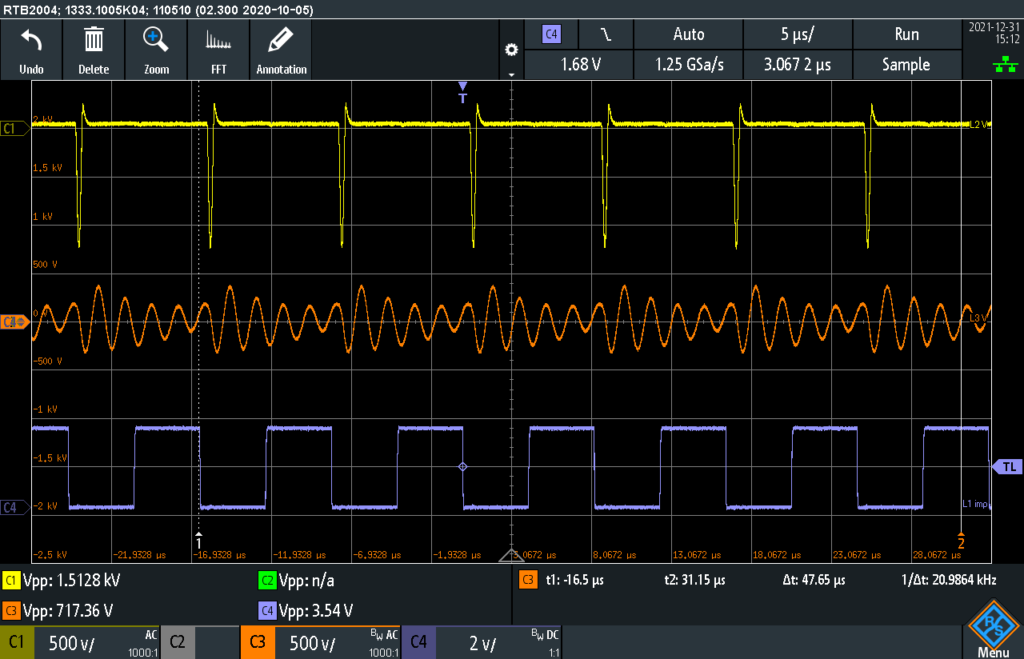 In Nikola’s 1890’s lectures and his radiant energy patents, he always refers to impulses.

What are these impulses? and how can we produce them.

while a coil discharge produces a voltage impulse.

We can have positive and negative impulses, but the key is to not have a polarity reversal (that’s why we need a resonant half wave).

In his 1891 London lecture Tesla explains how he produces the current impulse, by discharging a high voltage charged capacitor, through a coil by closing the series resonant circuit with a spark gap.

The electric field energy then transforms back and forth between the coil and the capacitor. Which makes this a series resonant system. But these are full wave cycles. and we can’t have any polarity reversal.

To only pass one polarity through the spark gap, and not the other, Tesla invented the quenched spark gap. In the lecture he describes using a very strong shielded magnetic field at a right angle to the spark.

This magnetic field works like a diode, which only passes one polarity, and blocks the other polarity.

This way he created what he called unipolar current impulses.

In his later less known publications, he revealed that he also used coil discharges. He used an auto oscillating relais coil, to produce, what we nowadays call Back EMF, inductive spikes. These are voltage impulses. But he didn’t state how he prevented the coil from oscillating at full cycles.

These voltage impulses were only used for low to moderate voltages. For his high power Colorado Springs and Wardenclyffe experiments, he still needed to rely on the disruptive capacitor discharges, through quenched spark gap(s). because that was the only way to produce very high voltage high power impulses.

My own solid state circuits are based on the coil discharge method.

I charge a coil with DC power, and then I suddenly interrupt the power supply, with my mosfet switch.

The coil then starts oscillating, starting with a negative voltage half wave, when I interrupt the positive DC.

Because the mosfet switch has a body diode, which opens up for positive voltages, the resonant ringing energy of the coil flows back up through the mosfet during the second half cycle.

The energy there is then again blocked by a *diode, and captured in a capacitor, that keeps the energy there, for the next cycle. So this is a very efficient use of energy, to practically produce free negative impulses. The only losses are from the resistance.

*The diode prevents the energy from flowing back to the power supply. but if a battery would be used as a supply, the diode and capacitor would not be needed. The positive impulse would directly be returned to the battery, charging it up for re-use.

Maxwell’s addition to Ampere’s Law, states a (rapid) change in (high) voltage, induces a displacement current. This video shows how to…

In this video, I show how the resonant voltage and current become IN PHASE when using Nikola Tesla’s extra coil.When Voltage and…

This video explains how to make the impulses Nikola Tesla used, with a coil a switch and a power supply.

In this video, I use electric impulses to levitate aluminium foil. The circuit is unique as it recycles electric energy.

In Nikola’s 1890’s lectures and his radiant energy patents, he always refers to impulses. What are these impulses? and how…

I have made a new video about my Radiant Half Bridge Circuit. Link to the isolated gate drive circuit…